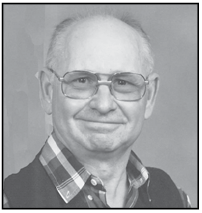 Peter Benjamin Gilles, 83, of rural Underwood, died Monday, January 30, 2017, at PioneerCare in Fergus Falls.
Peter was born on February 24, 1933, to Joseph and Magdalene (Goerger) Gilles in Barney, ND. He was baptized at the Parish of Sts. Peter and Paul Catholic Church in Mantador, ND. Pete attended grade school at St. Johns Parochial School and graduated from the Wahpeton High School. He studied for two years at North Dakota State School of Science and transferred to the University of North Dakota in Grand Forks, where he earned a degree in Electrical Engineering. Peter enlisted in the United States Army and served during the Korean Conflict based in Arizona and on the East Coast as a member of the Signal Corp.
Pete was united in marriage to Angela Klinnert in 1976, at St. James Catholic Church in rural Underwood. For many years he worked in White Bear Lake on the early development of computers and later worked for Rick Electric in Breckenridge. Before his retirement, he did some electrical work around the local area. In 2002, the couple moved to rural Underwood.
Peter was a member of the American Legion in White Bear Lake, MN, and also the Knights of Columbus. He loved fishing, tending a garden, pouring a cup of coffee at the Viking Café, putting together jigsaw puzzles, making fudge and in his early years, he enjoyed playing baseball.
He was preceded in death by his parents, Joseph and Magdalene Gilles; his brothers, Bernard and James; and his sisters, Elizabeth, Rosemary and Magdaline.
Peter is survived by his wife Angela Gilles of Fergus Falls; a sister, Vivian (Jack) Joyce of Arvada, CO; a brother-in-law, Ambrose (Joan) Klinnert of Dent; and many nieces and nephews.
Visitation: 4-7pm on Friday, February 3, 2017, at St. James Catholic Church with a prayer service at 6:30pm.
Service: 10:30am on Saturday, February 4, 2017, at St. James Catholic Church in rural Underwood
Clergy: Father LeRoy Schik
Interment: St. James Catholic Cemetery in rural Underwood
Funeral Home: Olson Funeral Home in Fergus Falls, MN