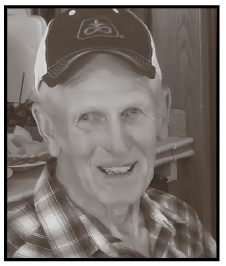 LeRoy Arthur Wiebe was born on December 31, 1938, in Wadena, Minnesota. His parents were the late Arthur and Leona (Hanebuth) Wiebe. LeRoy was Baptized on January 22, 1939, and Confirmed on April 6, 1952, at St. John’s Lutheran Church in Ottertail. LeRoy attended St. John’s Parochial School until 8th grade and graduated from the Perham High School with the Class of 1956.  LeRoy served honorably in the United States Army from November 24, 1961, to August 26, 1963. After the service he returned to Ottertail where he continued to farm.

As a young boy growing up on the family farm, LeRoy spent countless hours playing with dogs and cats, and learning how to be a dairy farmer from his father, Art. With his mother being deeply involved in 4-H, he soon found his calling in showing dairy cattle which fueled a life-long career in dairy farming, milking his beloved JERSEY cows. His father worried LeRoy’s love of milking cows would never motivate him to find a significant other. One day a smiley, bubbly lady arrived at St. John’s to teach school and play the organ. She surprisingly caught Roy’s attention. Her name was Lois Mueller.

On July 13, 1968, LeRoy was united in marriage with Lois Mueller at Trinity Lutheran Church in Athens, Wisconsin.  Their marriage was blessed with three children: Jeff, Beth, and Lynn.

LeRoy and Lois made their home, farmed, and raised their family on the family farm in rural Ottertail.  While at times his dairy career felt more like an obsession, he did manage to instill a strong work ethic into his children, which helped them in all aspects of life.

When his body could no longer make milking cows possible, he still enjoyed driving tractor and combine until dementia made that difficult as well, at which point he was always eager to ride along in the buddy seat for hours on end.

LeRoy was a member of the Farm Bureau, DHIA and Ottertail Elevator Board.  He loved going to Rollag and Big Iron every year.  He also enjoyed his kids sporting events, deer & duck hunting, auction sales, and anything farm related.

On June 26, 2021, he went home to his final reward and heavenly home with his wife, son, and daughter-in-law at his side at his home in Ottertail. He will be dearly missed by his family and friends.  Preceding LeRoy in death were his parents: Arthur and Leona Wiebe.