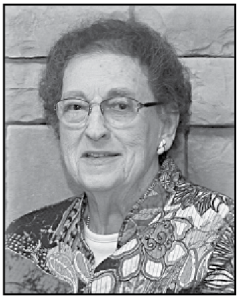 LaVerne was born October 6, 1924 to Oscar and Anna (Paulson) Erickson. She was baptized and confirmed at Sarpsborg Lutheran Church.  She grew up in the Dalton area, and attended Country School Districts 126 and 8, and graduated from Washington High School in Fergus Falls.  She went on to attend Agricultural School at the U of M campus in St. Paul.

In 1945 she went to Stockton, California and worked as a telephone operator for Pacific Telephone and Telegraph.  She returned to Minnesota and married Arthur E. Peterson on Nov. 26, 1947. They farmed for 16 years near Dalton, raising a daughter and a son.

In 1964 the family moved to Montana where she worked as a housekeeper, returning to the Fergus Falls area in 1967. In 1970 the family moved into their new home on Wall Lake. She worked at the Holiday Inn in housekeeping for 10 years until retirement.

LaVerne liked to travel and enjoyed cross word puzzles, cake decorating, canning, pickling and freezing garden produce and spending time with her family and grandchildren. She was a member of the Zion-Sarpsborg Ladies Aid and WMF-VFW Auxiliary. Family and friends will lovingly remember LaVerne as “The Lady in the Hat.”

Preceding her in death were her parents; husband, Arthur, who died in January of 2015; two brothers, Milton and Walter Erickson and sisters, Lillian Rude and Ruth Dahlager.