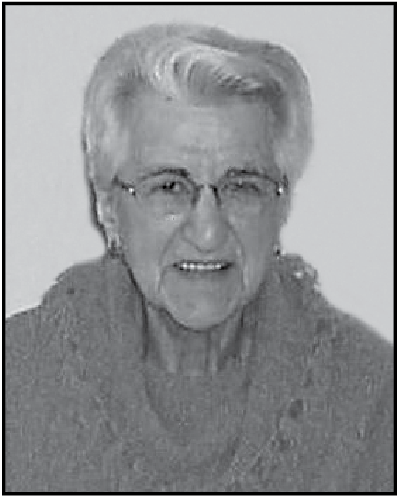 Gertrude Teresa Obowa, 96, of Fergus Falls died Saturday, February 3, 2018 at Sanford Hospital in Fargo.
She was born November 18, 1921 in Bismarck, ND, the youngest of six children born to John and Paulina (Gebauer) Obowa. Gert was baptized at St. Mary’s Catholic Church in Bismarck and moved with her family to Frazee and then to Fergus Falls at age four. She attended school at District 46 in Buse Township through the eighth grade and went on to graduate from Fergus Falls Washington High School.
Gert worked many places after graduation and went on to attend agricultural school in St. Paul. In 1948, she started working at Northwestern Bell Telephone as an operator in Fergus Falls and later in Park Rapids, Little Falls, Redwood Falls, eventually ending up back in Fergus Falls, to replace the lady that hired her. Gert became chief operator until retiring in August of 1981. After retirement, Gert traveled extensively throughout the world including trips to Turkey, Russia, Argentina, Spain, France, Germany, Austria, Switzerland, Japan, the Caribbean, Alaska, Bali, and China. She also enjoyed flower gardening and caring for her home. In 1982, she began volunteering at Lake Region Hospital. Gert had a special place in her heart for everyone and was genuinely interested in what was going on in people’s lives.
Gert is survived by many nieces and nephews. She was preceded in death by her parents, three brothers: Frank Obowa, Joe (Cassilda) Obowa and Louis (Virginia) Obowa; two sisters: Caroline (Cyril Imholte and Jules Jennen) and Rosalie (John) Gabrys and one niece, Elizabeth Obowa.
Memorials are preferred to the Our Lady of Victory School Endowment Fund or Otter Tail County Historical Society.
Visitation: Friday, February 9, 2018 from 4-7pm with a prayer vigil at 7pm at the Glende-Nilson Funeral Home in Fergus Falls and resuming for one hour prior to the service at the church.
Mass of Christian Burial: Saturday, February 10, 2018 at 11am at Our Lady of Victory Catholic Church.
Clergy: Father Alan Wielinski, Father Bill Gamber, Father Tim Wenzel, and Deacon Chuck Kampa
Burial: St. Otto’s Catholic Cemetery in Fergus Falls
Funeral Home: Glende-Nilson Funeral Home of Fergus Falls
Condolences: www.glendenilson.com