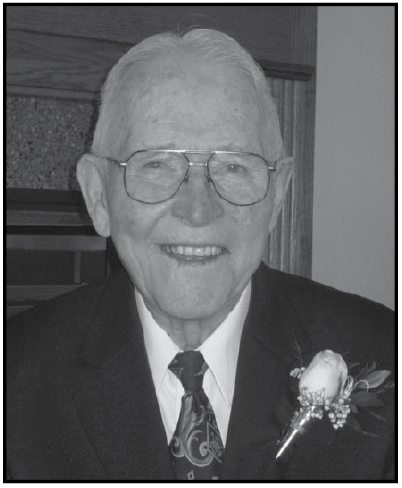 Gerald Oliver Tysver, 97, a resident of Fergus Falls, passed away Thursday, February 15, 2018, at his home.
He was born on March 22, 1920, in Red Elm, SD, the son of Oliver and Gudbjorg (Holey) Tysver. The family moved to Hazen, ND in 1927 and later moved to Chicago, IL, where Gerald was confirmed at Bethany Lutheran Church. In 1936, the family moved to Coloma, WI, where he graduated from high school. They moved to Orwell Township, MN in 1945, and on May 21, 1946, Gerald married Mildred Hexum, at Hedemarken Lutheran Church in Carlisle, MN.
Gerald worked as a mechanic for Gamble Skogmo Motors before moving to the farm by Carlisle in 1952, where he dairy farmed. In 1982, they retired and moved to their home in Fergus Falls.
Gerald was a gifted mechanic and electrician, working on many projects at home and for neighbors and his sons over the years. He served for many years on various boards, including the Carlisle School, Oscar Town Board, Hedemarken Church, Farmers Club, and 4-H. After moving to Fergus Falls, he was very involved with Calvary Lutheran Church activities and Bible Studies, Y’s Folks and Golden Kiwanis, where he volunteered. He will be remembered as a concerned and faithful husband, father, grandfather, great-grandfather, neighbor and friend.
He is survived by his wife of 71 years, Mildred; his seven sons, Jim (Patty) of Fenton, MI, Chuck (Ivy) of Barnesville, Mark (Faith) of Fergus Falls, Paul (Melanie) of Fergus Falls, Dan (Belinda) of Rice, Bruce (Lori) of Fergus Falls and John (Dara) of Fort Collins, CO; 24 grandchildren; 53 great-grandchildren; two great-great-grandchildren; brothers-in-law and sister-in-law, Jorolf Ronnevik and Al and Ellen Hexum.
Preceding him in death were his parents; brother Andrew, and sisters Mildred and Anne.
Visitation: Monday, February 19, 2018, 5-7pm with a 6:30pm public prayer service at the Olson Funeral Home in Fergus Falls, and will resume one hour prior to the service at the church
Service: Tuesday, February 20, 2018, 11am at Calvary Free Lutheran Church, Fergus Falls
Clergy: Reverend Jim Johnson
Interment: Oak Grove Cemetery, Fergus Falls, MN
Olson Funeral Home, Fergus Falls is in charge of arrangements
Online condolences may be sent to www.OlsonFuneralHome.com