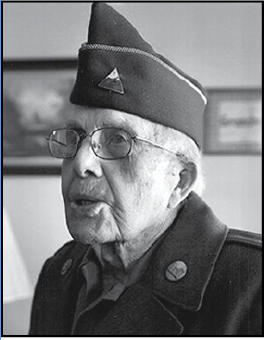 George Ballard, age 101, a resident of Fergus Falls, MN formerly of Pelican Rapids, MN passed away on Saturday, August 26, 2017 at Park Gardens in Fergus Falls, MN under the care of his family and LB Homes/Lakeland Hospice.
George Ray Ballard was born on December 7, 1915 to Garrison Ray and Bessie (Larson) Ballard on the family farm near Plaza, ND. George grew up on the farm and attended school in Plaza, ND. His family moved to the Pelican Rapids area when George was in his 20’s. He entered the US Army in March of 1942 and served in the 5th Armored Division, 22nd Armored Engineers, Company B. George was discharged in October of 1945. He served throughout the European-African-Middle Eastern Theatre in the Central Europe; Normandy; Northern France; Rhineland; and Ardennes Campaigns, for which he was awarded 5 bronze campaign stars. The night before the Battle of the Buldge, George’s company in a dense fog was moved back from the front lines. During the morning when the dense fog lifted he watched as the bombers flew in and the battle started. The 5th Armored Division whom he was with was one of the most highly decorated Divisions during the European Campaign. He was a humble man and never spoke of the war or his awards, most of the family knew nothing about his time of service until at the age of 100 when he was interviewed by the Fergus journal.
Following his service to his country, George returned home to the family farm in Pelican Rapids. He met his future wife Verna at a dance in Detroit Lakes. George was united in marriage to Verna Cecelia Fredrickson on December 14, 1949. Throughout their married years, George and Verna owned and operated a family dairy and raised crops to support the farm. George and Verna moved to Fergus Falls in 1997.
George played baseball during the barnstorming days of the 30’s and 40’s playing with a local team and area league. He played several positions and was a very good player. His oldest great-grandson has his uniform and glove as he played baseball in the same positions as George. When time allowed, George enjoyed cabin time with the family, fishing with family and friends, and spear fishing in the winter.
George was deeply loved by his children, grandchildren and great-grandchildren.
He was a member of North Immanuel Lutheran Church rural Pelican Rapids.
George is survived by his son Greg Ballard, Pelican Rapids; 3 daughters: Georgine (Richard) Robinson, Hastings, MN, Brenda Rasmussen, Rothsay, and Pam Ballard, Fergus Falls; 8 grandchildren: Teri (Greg) Bontjes, Danielle (Heidi Paulson) Ballard, Megan (Jim) Viele, Christine (Jared) Sachs, Michelle Robinson, Wendy Stoll, Stacy (fiancé Kerry Shapiro) Scheer and Nikki (Joey) Walker; 17 great-grandchildren; sister in law Maxine Ballard, Pelican Rapids, and many nieces and nephews.
He was preceded in death by his wife Verna, February 14, 2016, his great-grandson Jameson; daughter-in-law Donna Ballard; son-in-law Keith Rasmussen; and 5 siblings: Hazel Miller, Mabel Abrahamson, Florence Bockness, Ralph Ballard, and Evelyn Wiig.
Memorials are preferred to North Immanuel Lutheran Church.
A special thank you to the staff at Park Gardens and LB Homes/Lakeland Hospice for their loving and compassionate care for George. Also thank you to all of the people who took time to visit with George, those visits meant so much to him.
Visitation: Sunday, September 3, 2017 from 1-2pm, at North Immanuel Lutheran Church.
Funeral: 2pm, Sunday, September 3, 2017 at North Immanuel Lutheran Church, 12713 County Hwy 30, Pelican Rapids, MN.
Clergy: Pastor Ethan Fearing
Burial: West North Immanuel Cemetery
Pallbearers: Everett Ballard, Kevin Ballard, Richard Fredrickson, Rodney Fredrickson, Bob Fredrickson, Brian Shores and Greg Bontjes
Honorary Pallbearers: “Grandchildren” Teri (Greg) Bontjes, Megan (Jim) Viele, Danielle (Heidi Paulson) Ballard, Wendy Stoll, Stacy Scheer, Nikki (Joey) Walker, Christine (Jared) Sachs, Michelle Robinson
Funeral Home: Larson Funeral Home, Pelican Rapids, Minnesota
Online Guestbook: www.larsonfuneralpelicanrapids.com