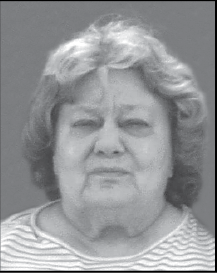 Yvonne F. Hanson
Yvonne F. Hanson, 72, of Fergus Falls, died on Tuesday, December 29, 2015, at her home.
She was born August 7, 1943, in Fergus Falls, the daughter of Raymond and Dorothy (Kroll) Dohrer.  Growing up, she attended a rural school near Rothsay and graduated from Rothsay High School in 1961.
On June 29, 1968, she married Richard Hanson in Elizabeth.  Yvonne was a lunch lady and sandwich maker, in the Minneapolis School District.  She raised two daughters on her own and was the best mom any kid could ask for. She was a strong and tough lady and also taught her girls to be that way. Yvonne was a wonderful Grandma to Eric Jr. and Vonna, the joys of her life. She will be greatly missed by them, as they were with her almost every day of their lives.
Yvonne enjoyed crossword puzzles, shopping and going out to eat with her daughter and grandchildren, watching TV, babysitting her grandchildren and in her younger years, she enjoyed sewing.
Preceding her in death were her parents; a brother, Peter Dohrer; sister-in-law, Jane Dohrer: and her greatest loss in her life, a daughter, Nancy Hanson, who died on October 15, 2005.
Survivors include her daughter, Patsy (Eric) Dow of Fergus Falls; two grandchildren, Eric Jr. and Vonna Dow; sisters, Elaine (Dave) Tomhave of Battle Lake, Carolyn Erickson of Winthrop Harbor, IL, Juneal (Greg) Green of Rothsay, and Paula (Keith) Grunewald of Elizabeth; a brother, Harvey Dohrer of Ellsworth, WI; a sister-in-law, Vicki (Mike) Lahlum of Detroit Lakes; aunts, Harriet (George) Whitfield of Carlsbad, CA and LaVerne Hanson of Pelican Rapids, along with several nieces, nephews and cousins.
Visitation: 4-6pm Monday, January 4, 2016, at the Olson Funeral Home and will resume one hour prior to the service at the church
Mass of Christian Burial: 11am Tuesday, January 5, 2016, at St. Elizabeth Catholic Church, Elizabeth
Clergy: Father Jeff Ethen
Interment: St. Elizabeth Catholic Cemetery, Elizabeth
Olson Funeral Home is in charge of arrangements
Online condolences may be sent to www.olsonfuneralhome.com