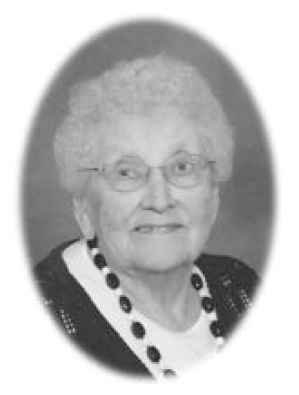 Oradell Maurella Lueders was born on July 22, 1920 in Ottertail, Minnesota. Her parents were the late Herman and Amanda (Glaeser) Lueders. Oradell grew up on a farm near Ottertail, Minnesota. She attended St. John’s Lutheran School and Perham High School. She then worked for a short time until she met and married Arthur Bolland. They were united in marriage on September 27, 1942 at St. John’s Lutheran Church, Ottertail, Minnesota. Their marriage was blessed with four children. They farmed near Henning before retiring and turning the farm over to their sons in the early 1970’s. Arthur passed away in 1994. Oradell stayed on the homestead until moving to the Willow Creek assisted living facility in Henning in 2013. She was an active member of St. John’s Lutheran Church Ladies Aide. She was also a member of the Leaf Lake Homemakers Club. Oradell enjoyed knitting, crocheting, quilting and gardening.  Arthur and her enjoyed several bus trips and a cruise together. Oradell also was able to enjoy a trip to Spain with son, Arthur Jr.  She still enjoyed knitting despite her loss of eyesight. Oradell passed away on September 10, 2016 at Willow Creek. She enjoyed her stay there until the time of her death.  She will be dearly missed by her family and friends. Oradell was preceded in death by her parents, her husband Arthur, son David Bolland and brother Delmont Lueders.