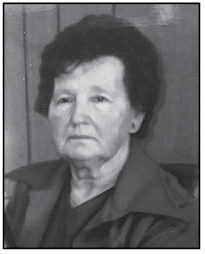 Joan Raatz, 85, of Verona, ND, passed away September 24, 2018, at the Oakes Community Hospital.
Joan May Hess, daughter of John and Janna (Wiemann) Hess was born July 8, 1933 at LaMoure, ND. The family moved around 1940 to the Verona area, where she attended school. Joan worked for several area farm families helping them with meals, taking care of the kids and cleaning the house. She was united in marriage to Ronald Raatz on March 16, 1952 in Verona. They made their home and farmed the family farm near Verona. Joan worked side by side together with her husband on the farm while raising their family. Ronald passed away on July 3, 2004, and Joan continued to work on the farm until her health deteriorated.
She is survived by her children, Paul Raatz of Valley City, ND; Kevin (Karen) Raatz of Stanton, NE; David (Tina) Raatz of Nashville, TN; Virginia Hapala of Cogswell, ND; Pernell (Julie) Raatz of Rothsay, MN and Miles (Lynette) Raatz of Verona, ND; a brother, Harold (Mary) Hess of Oakes, ND; three sisters, Frieda Heyd of LaMoure, ND; Jean Urbach of Lisbon, ND; and MarJo (Clarence) Steffes of Bismarck, ND; and several grandchildren and great-grandchildren. Joan was preceded in death by her parents, her husband Ronald, two sons Jeff and Curtis; brothers, Wayne, John Jr. and Harland; and a sister, Olga.
A memorial service will be held on Monday, October 1, 2018 at 10:30am at St. John’s Lutheran Church, Verona, ND followed by the burial at Pilgrim’s Rest Cemetery near Verona, ND.
Funeral Home: Dahlstrom Funeral Home, Oakes, ND.