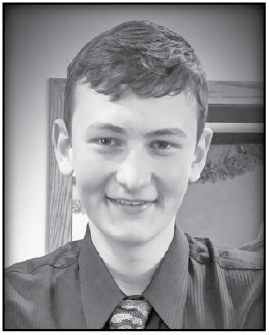 Jacob Lewis Quam was born on August 7, 2000 in Buffalo, Minnesota to Angela Dawn (Eckhoff) Quam and Tommie Quam. Jacob grew up in Montrose and attended school in Delano where he resided with his Mom & Dad. In 2013 he made his home in Vining, Minnesota with his mother, Angela and enjoyed fishing trips at Lake of the Woods with his father, Tommie.
Jacob attended the Henning High School where he was active in football, basketball, trapshooting and weightlifting. He loved the outdoors. Jacob enjoyed deer, duck and goose hunting, fishing, farming, snowmobiling, and riding dirt bike. His great sense of humor, sharp wit and kind heart will be greatly missed.
Jacob was an excellent student and always received academic distinction on the honor roll. Jacob was an incredible source of pride for his family. In addition to his family, all who knew him knew that Jacob was an exceptional young man.
On April 13, 2017 Jacob passed away due to injuries sustained in an automobile accident on Highway 210, rural Vining, Minnesota at 16 years of age. He will be dearly missed by his family and friends.
Preceding Jacob in death were his great-grandparents: Orrel Ellingson; Charlotte & Albert Eckhoff; Lewis & Dorothy Quam; Alton & Adella Anderson.
Jacob is survived by his mother, Angela Quam of Vining; father, Tommie Quam of Goodridge; great-grandmother, Norma Ellingson of Henning; grandparents: Gary & JoAnn Eckhoff of Henning; Curtiss & Donna Quam of Detroit Lakes; aunt and uncles: Keith (Angela) Eckhoff and their children: Austin, Sydney, Natalie and Gretchen; Jill Doll and her daughter, Jocelyn; Andrew (Sara Bakken) Eckhoff; BJ Oseien, his children Ben and Macy Oseien; Tami (Darrin) Byklum and their children: Beau, Tori and Trea; Karla (Zack) Bancroft and their children: Kiersten & Nick; Kurt (Jodi) Quam and their children: Kayla (Jordan) Olson, Kaiden, Daltyn & Kash; Donavon (Paula) Quam and their children: Parker, Oliver, Addison and Kaja; many other relatives and a host of friends.
Visitation: Sun., April 16, 4-7pm at the Henning High School, Henning, MN. Prayer Service will be held at 6:30pm. Funeral services will also be held at the Henning High School on Mon., April 17 at 3pm with visitation one hour prior.
Arangements by Belmont-Karvonen Funeral Home, Henning, MN.
Please visit www.karvonenfuneralhome.com to send Jacob’s family a message of comfort and support.