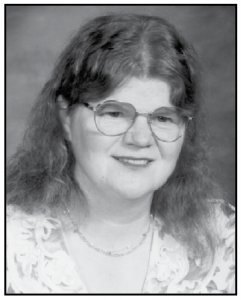 Delores Ester Shelley was born February 16, 1947 to Eino and Lorriane (Baakkonen) Anderson in at Wesley Hospital, Wadena, MN. She was baptized in 1947 and confirmed in 1963 at New York Mills Apostolic Lutheran Church.  Delores graduated from New York Mills High School, the class of 1966. She married Lee John Shelley December 28, 1974. She loved kids, family and grandkids.

Delores worked several years at Medallion Kitchens and most recently at Burger King. She also babysat, helped friends with their kids and did house cleaning.  She was a member of the Senior Center and Salvation Army.  Delores loved Garfield funnies, cats, country music, decorating for the holidays and flowers. Her hobbies include bingo and collecting birds. She was a Minnesota sports fan, especially Vikings. Delores always had a smile on her face, helped others in need, was a hard worker and was strong in her faith.

She is survived by her children, Jeff Shelley of Alexandria, Joy Shelley of California and Carmel Shelley of Fergus Falls; three grandchildren Ashley, Zachery and Emily; two sisters, Darlene Anderson and Shelia Anderson; numerous family and friends.  She was preceded in death by her parents, husband Lee in November, 2002, daughter Tania Shelley and sister Sharon Anderson.