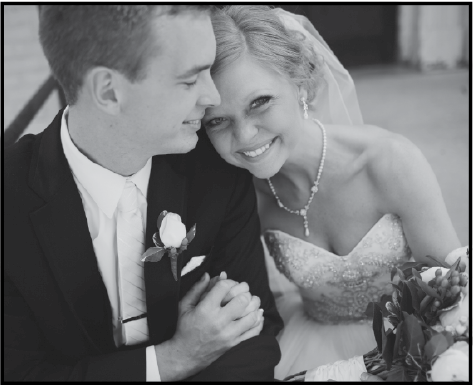 Talya Lori Tysver and Jason Bennett Heckman were married Saturday, May 21, 2016, at Bethel Lutheran Church in Fergus Falls, with the Rev. David Foss officiating. Parents of the couple are Bruce and Lori Tysver of Fergus Falls, and Merle and Cindy Heckman of Walton, KY.
Grandparents are Gerald and Mildred Tysver of Fergus Falls, and Curtis and Elaine Kavlie of Richville.
Matron of Honor was Tara Carlson, sister of the bride. Bridesmaids were Sara Tysver, sister-in-law of the bride; Suzanne Streit, Emily Heckman, sisters of the groom; Jessica Heckman, sister-in-law of the groom; Kaylie Risbrudt and Amanda Shelley, cousins of the bride; Alicia Lacey, Larissa Brue, Rachel Schultz, Lindsay Rogness, Kirsten Kennedy, and Sophia Undseth, friends of the bride. Flower Girls were nieces of the bride, Hallie Tysver and Elsa Carlson, and nieces of the groom, Olivia Streit and Ashton Streit. Personal Attendants were Kari Stedjan, friend of the bride, and Kelsey Kowalski and Bailey Rowley, cousins of the bride.
Best Man was Brian Heckman, brother of the groom. Groomsmen were Doug Heckman, Scott Heckman, Stephen Heckman, brothers of the groom; Tyler Tysver, brother of the bride; Geoff Streit, brother-in-law of the groom; Luke Carlson, brother-in-law of the bride; James Stedjan, Kevin Doty, Shane Breitzke, Eric Duey, James Dereka, and Aaron Kronawetter, friends of the groom. Ring Bearers were nephew of the groom, Quinton Streit, and nephews of the bride, Josiah Tysver and Troy Tysver.
A dinner reception and dance followed the ceremony at the Bigwood Event Center.
Jason will graduate with his Doctor of Physical Therapy from Lynchburg College in May of 2017. Talya accepted a position at Heartland Rehabilitation Services as a Doctor of Physical Therapy in Salem, VA.
The couple honeymooned in Jamaica. They will reside in Roanoke, VA.