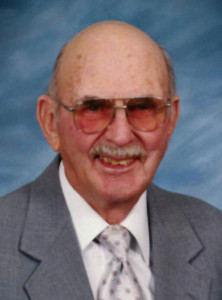 Richard Keith Ingle was born on June 6, 1921 in Iron River, Wisconsin, the son of Willis and Louise (Gilbertson) Ingle.  He graduated from Iron River High School in 1939 and was on the honor roll.  During his younger years, Richard was proud to earn the rank of Eagle Scout, receiving also the Bronze, Gold and Silver Palms.  He attended school at Superior State Teachers College and also in Greendale, Wisconsin, receiving training in forestry.

On April 16, 1942, Richard joined the US Army, serving in the South Pacific, Hawaii, New Guinea, and was part of the initial wave to hit the Philippines as part of the mine laying and removal squad.  Richard and his squad ended up for a time in Japan.  The result of his military service, Richard received the bronze star and numerous other medals for his service.  Following his honorable discharge in 1945, he went to work for Iron River Water Light and Power as a surveyor, assisting with the installation of power and telephone lines.  Richard went on to work for Indian Head Radio and Electric, for Bechtel as a junior field engineer on a pipeline project from the United States to Canada.

Richard worked for the U.S. Army Corps of Engineers from 1954 – 1981, was a building inspector, and was head lock and dam operator at the upper St. Anthony Falls lock and dam, the highest lock on the river.  He also was an assistant fire chief, ambulance driver, special deputy sheriff, lifeguard, and assistant scout master.

Richard was a member of Bethel Lutheran Church in Fergus Falls, and was a life member of the American Legion and VFW.

In addition to his parents, he was preceded in death by his wife, Alice in 2010, and by his siblings, Fred Ingle and Blanche Lemke.

Visitation:  One hour prior to services