A ‘Sneak Peek’ public viewing of a progressing clay sculpture of Nimuué, the Glacial Minnesota Woman, is scheduled for 2-4 p.m. on Saturday, March 19, at the Muddy Moose Restaurant in downtown Pelican Rapids, Minn. This is the first public showing of the sculpture, which will be cast in bronze for permanent display in Pelican Rapids.

Sculpted by area artist Marcella Rose, the 3.5-foot creation is titled ‘Spirit Rising.’ It depicts Rose’s perception of the prehistoric young woman whose remains were found in 1931 about a mile north of Pelican Rapids during construction of what is now U.S. Highway 59. She is believed to have lived about 20,000 years ago and may represent the oldest archeological discovery in North America.

‘Spirit Rising’ shows this young woman creating music from within, blowing into a whelk. She is in communion with a pelican, whose origins in the area go back much further in time. Nimuué also carries some of the items (such as a turtle carapace and tools) that were found with her.

The bronzed version of ‘Spirit Rising’ will be unveiled during a special Gathering Day ceremony on June 18 in Sherin Memorial Park, Pelican Rapids.

Glacial Minnesota Woman Organization received a legacy grant from the Lake Region Arts Council to partially fund the creation of the sculpture for the City of Pelican Rapids, and are in need of contributions to secure the final casting process. 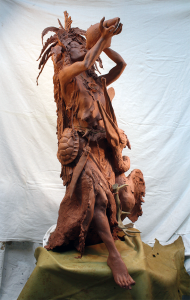