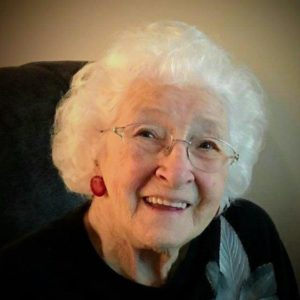 Softly and tenderly, Jesus called Marie Wentzel home to Heaven on September 19, 2021, while surrounded by her loved ones at Pioneer Heritage Cottage, Fergus Falls, MN.

Marie was born September 18, 1926, to Richard and Arla (Junken) Holmquist in Fergus Falls where she also grew up. After her high school Junior year, she traveled to Seattle where she supported the war effort by working at Boeing in food service, bringing lunches to the many assembly lines of the aircraft plant. Marie returned to her Senior year at Fergus Falls High School and graduated in 1945. After one date with Harold Wentzel, he was called to war serving in Europe. Marie and Harold’s relationship continued to grow through letters. Upon his return from the service, the couple married on January 1, 1946, at Augustana Lutheran Church, Marie’s home church. The whole nation celebrated after World War II and so did Marie and Harold. They celebrated their marriage every January 1st for 59 years, dancing until Harold’s passing in 2005. Along with raising five children, Marie managed the Highway Grocery in Fergus Falls, and co-owned Harold’s Fairway in Underwood.

Marie and Harold retired to their cozy cabin on Little Cormorant Lake in 1983. For the next 25 years they enjoyed many friendships on Maple Ridge Beach, Sugar Island, and at St. Peters Lutheran Church.

In lieu of flowers, memorials are preferred to Samaritans Purse, “Heal our Patriots” PTSD Project, or Knute Nelson Hospice.

Memorial Service: 11:00 a.m. Friday, September 24, 2021, at Olson Funeral Home in Fergus Falls, with visitation one-hour prior to the service at the funeral home. Please refer to Marie’s Tribute wall for a link to the live-stream of the memorial service.
Clergy: Reverend Craig Wentzel
Interment: Knollwood Memorial Gardens, Fergus Falls, MN

Funeral arrangements are provided by the Olson Funeral Home.
Online condolences may be sent to www.olsonfuneralhome.com