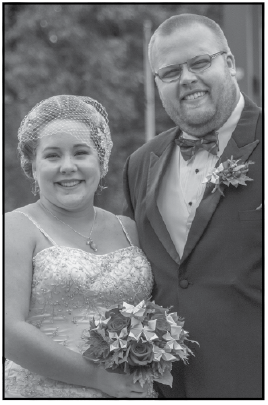 Benjamin Phillip Kugler and Sara Ann Conley were united in marriage on September 23, 2017, at St John Lutheran Church, Fargo, ND with the Rev. Dr. C. Edward Morgan, friend of the family, and Rev. Brian Hansen officiating. A reception, dinner and dance was held following the ceremony at the Red River Zoo, in Fargo. A reception was also held on September 30, at the Staggering Ox, in Helena, Montana.
Parents of the couple are Phil and Lori Kugler of Erhard, Minnesota, Connie Conley and the late Chuck Conley of Helena, Montana.
Maid of Honor was Angela Conley, sister of the bride. Bridesmaids were Kristen Zappa, sister of the groom, Shana Johnson, cousin of the groom, and Jenny Lorsung, Sarah Vlasak, Mandy Blohm and Sara Johnson, friends of the bride. Olivia Anderson, cousin of the groom, was junior bridesmaid. Aubree Anderson, cousin of the groom, was flower girl. Personal Attendants were Elizabeth Montgomery and Sarah Biessener, friends of the bride.
Best Man was Tanner Johnson, cousin of the groom. Groomsmen were Pasquale Zappa, brother in law of the couple, Adam Peasley, cousin of the groom, and Jason Lorsung, Shane Hanson, Brett Weiss, and Maycoll Johnson, friends of the groom. Gavin Simonson, cousin of the groom, was junior groomsman. Theodore Zappa, nephew of the couple, was ring bearer. Ushers were Ross Johnson and Larry Peasley, uncles/Godfathers of the groom, and Virgil Flegel, uncle of the bride. Program Attendants were Brad Anderson, Seth Simonson, Grant Simonson, Ian Anderson, Micah Simonson, Jayden Watson, and Emrys Watson, all cousins of the groom.
Soloists were Connie Conley, mother of the bride, Angela Conley, sister of the bride, and Annette Anfinrud, aunt of the bride. Scripture readers were Lisa Johnson and Brenda Peasley, aunts/Godmothers of the groom.
Ben is a 2010 graduate of Kennedy Secondary in Fergus Falls, MN, a 2012 graduate of M State Fergus Falls with an Associate of Arts degree, and a 2015 graduate of NDSU in Fargo, ND with a Bachelor of Science degree in Civil Engineering. He is employed as a civil engineer at Moore Engineering in West Fargo, ND.
Sara is a 2010 graduate of Capital High in Helena, MT and a 2014 graduate of Concordia College in Moorhead, MN with a Bachelor of Arts in Environmental Studies. She is currently employed at Integreon in Fargo as a work flow coordinator.
Following their honeymoon in Yellowstone Park, the couple resides in Fargo, North Dakota.