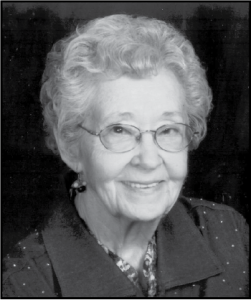 April 3rd was a special day in the Albert and Wanda (Goter) Schulz home for on that day in 1924 Selma “Sally” was born in Lowery Township of Stutzman County, North Dakota, where she was baptized, confirmed and attended school. Lowery Township is located northwest of Woodworth, North Dakota.

On April 29, 1943, she married Edward Leapaldt at Trinity Lutheran Church of New Home. The couple farmed near Woodworth before moving to Carrington where they operated the Case Implement Shop and then returned to the farm. They had six children. Edward died in 1971. Sally moved to Woodworth where she worked as a teacher’s aid and waitress. In 1974, she moved to Carrington and was employed as a Nursing Assistant and also in Tupperware sales.

On December 29, 1979, she married Harland Martinson at Augustana Lutheran Church in Fergus Falls. The couple resided on Ten Mile Lake, rural Dalton, MN. Harland passed away in October 2010.
Sally was a member of Our Savior’s Ten Mile Lake Lutheran Church where she served as a WELCA officer. She was also a 4H leader, Sunday School Teacher, a member of the homemakers club and served as treasurer of the Lake Country Auxillary up to the age of 90.

Preceding her in death were her parents, Wanda in 1974 and Albert in 1991; her first husband, Edward in 1971 and Harland in 2010; two sisters, Eunice (2 years old) and Lois; four brothers, Alvin, Randy, Leno, and Norbert and a great grandson, Bennett Endres.