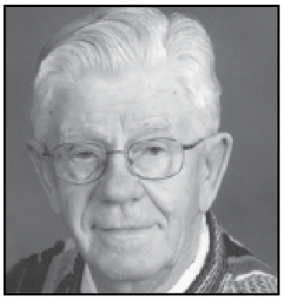 Art was born on February 15, 1926, in Hibbing to Erick and Edith (Wallin) Wickstrom. He attended school in Hibbing and graduated in 1943. His father passed away when he was only seven years old and he worked very hard to help his mother and siblings. One of Art’s proudest memories was working in the Iron Mines near Hibbing, for the Oliver Iron Mining Company from 1943 to 1951.
He was enlisted in the United States Navy from 1944 to 1946, serving in the American Theatre, during World War II. After his service he attended Gustavus Adolphus College where he earned his B.A. in 1949, and then he went on to attend Augustana Seminary in Rock Island, IL, graduating in June of 1953. While attending seminary, he met the young woman that he would one day marry. Art was ordained into the ministry of Augustana Lutheran Church at Rockerfeller Chapel in Chicago, IL. In 1957, he received a commission in the United States Naval Reserve and retired from the Navy as Lieutenant Commander on March 10, 1978.

On June 7, 1952,  Art was married to Marion Ingrid Bondeson in Chicago, IL. Together they raised three daughters and a son, while serving parishes full- time in Alvarado, MN, Roy, UT, Clearbrook, MN, Clinton, MN, Elizabethtown, KY, and lastly he served Peace Lutheran Church in Barrett, MN, retiring in 1986. After this, he served part time in Holmes City, MN, and at Zion Lutheran Church in Fergus Falls.

After his retirement, Art and Marion moved to Fergus Falls. They enjoyed living in their condo and having morning and afternoon coffee with friends. Art was a member of the Fergus Falls American Legion Post30, Augustana Lutheran Church in Fergus Falls, the YMCA, the Y’s Folks, and the Morning Watch Ministry. Marion passed away on May 16, 2010, at which time Art moved to Pioneer Pointe. He enjoyed living there and moved to Park Gardens in 2015.

Art enjoyed reading his bible daily, Polka music, jigsaw and crossword puzzles, and assembling old cars. Most of all, he loved the time he spent with his children and grandchildren, teaching them all of his jokes, silly songs and his love of Jesus. Art will be remembered for his gentle, humble, and easy-going nature.

He was preceded in death by his parents, Erick and Edith Wickstrom; and his wife, Marion Wickstrom.