Minnesota Board of Water and Soil Resources

The Minnesota Board of Water and Soil Resources (BWSR) is pleased to announce that Brad Mergens, District Manager for the West Otter Tail Soil and Water Conservation District (SWCD), and Darren Newville, District Manager for the East Otter Tail SWCD, have been honored as the 2015 Outstanding SWCD District Employees of the Year. This marks the first time two individuals have received the award in the same year.

Brad and Darren are each excellent district managers in their own right, and have worked together to develop the successful Otter Tail County Buffer Initiative. Demonstrating a commitment to soil and water health, the Otter Tail County Buffer Initiative will install 50-foot vegetated buffers on 100% of the agricultural land adjacent to the county’s lakes, rivers, streams and ditches. The effort will benefit 1,049 lakes and 1,174 miles of waterways by helping keep soil on the land and runoff out of the water The County received the 2014 County Conservation Award from the Association of Minnesota Counties for this work, which pre-dates the buffer legislation that became law earlier this year.

District managers play a central role in local conservation. They lead and support a variety of district operations, from personnel to program administration, outreach to planning. Brad and Darren are examples of conservation leadership at its best. In 2015, thanks to their work, Otter Tail County enrolled over 12,500 acres in conservation programs. The two district managers have developed a successful working relationship with the County Board of Commissioners, becoming go-to sounding boards for conservation issues.

In addition to his efforts on the county-wide buffer initiative, thanks to Brad Mergens’ leadership the West Otter Tail SWCD became the second district in the state to house a Pheasants Forever Farm Bill biologist position. They are key partner in the Minnesota Ag Water Quality Certification program, whose Whiskey Creek pilot area falls within the district. The district also continually works with other partner agencies at the local and state levels to provide landowners with more opportunities to implement conservation practices.

Under Darren Newville’s tenure, the East Otter Tail SWCD has contracted with a neighboring district to provide managerial and accounting support, been a statewide leader in implementation of best management practices for irrigation, and provided support to the Minnesota Ag Water Quality Certification Program by housing a specialist in their district office who serves a 12-SWCD area. Newville and his staff have worked hard to build strong working relationships with the landowners in their district and are always looking for partnerships that enable them to get more conservation on the ground.

“Brad and Darren’s proactive leadership and ability to coordinate, communicate and cooperate provide a model for local conservation partnerships in action,” BWSR Executive Director John Jaschke said. “Their work on the Otter Tail County Buffer Initiative demonstrates the important role that SWCDs play in making these programs a success.”
The Outstanding Soil and Water Conservation District Employee of the Year is awarded at the Minnesota Association of Soil and Water Conservation Districts’ convention, held annually in December. 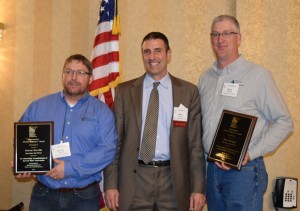