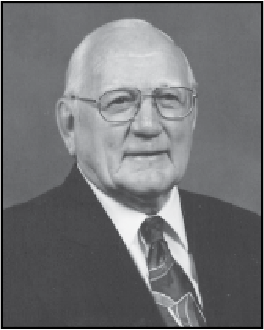 Astor Perry “Pete” Holte, 99, a resident of Fergus Falls, died Thursday, November 10, 2016, at the MN Veterans Home, Fergus Falls.
He was born October 16, 1917, in Fergus Falls, the son of Peder and Alma Minnie (Linnerud) Holte. He was baptized on November 16, 1917, and was confirmed in the Lutheran faith as a teenager. He grew up and attended school in Battle Lake. Pete served in the U.S. Army Air Corp from July 22, 1942 to January 1946, stationed in Roswell Army Air Force Base in Roswell, New Mexico.
On July 1, 1949, he married Ardelle Hulet in Fergus Falls and they were blessed with two sons. Pete was employed at various places in Fergus Falls, including Holsum Bread and Park Region Bakery as a route salesman.
Zion Lutheran Church has been his church home since 1954. He served on the council, and building committee, was a Sunday School teacher, and a faithful member. Pete and Ardelle enjoyed traveling to Texas, Canada and Mexico and Pete enjoyed flowers.
Preceding him in death were his parents and two brothers, Ralph and Philip.
Survivors include his wife, Ardelle; two sons, whom he was very proud of along with their families, Pastor David (Ellen) of Brainerd and Mark (Julie) of Fergus Falls; grandchildren, Lise, Holte, Peder Holte, Brandon (Chelsea) Holte, Brittany (Joshua) Knutson, McKenzie (Brian) Cunningham,; great-grandchildren, Levi, Carter and Hudson Knutson and Harlow and Will Cunningham; a sister, Roselyn Holte; brothers-in-law, Charles (Phyllis) Hulet and Robert Hulet along with nieces and nephews.
Visitation: One hour prior to the service at the church
Service: 11:00 AM on Wednesday, November 16, 2016, at Zion Lutheran Church, Fergus Falls
Clergy: Reverends Chris Eldredge and Nancy Hess Eldredge and Chaplain David Strom
Cemetery: Oak Grove Cemetery
Funeral Home: Olson Funeral Home, Fergus Falls.